Confessions of a Safety Pro – Slips and Falls 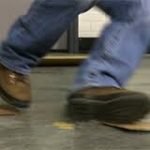 A Time for Self -Confession or Do As I Say Not as I Do
When I hit the patch of ice at the top of the concrete steps leading into my early morning college class, I did not even have time to react. Slip, land, and tumble the rest of the way down the steps. I hit my back hard which was followed by the sense of relief that I could move my arms and legs. My next thought, as a kind co-ed asked if I was alright, was “well that couldn’t have looked too cool, I wonder who else witnessed my stunt”. Could have been worse. At least no one there knew me well enough to say, “hey aren’t you majoring in Safety Sciences”.

Wish I could say there haven’t been other slips, trips and fall occurrences. At another time many years after college, I was in a poorly lit area and somehow decided that I had reached the stair landing. That one was an impressive fall as I stepped into space, hands full of safety training equipment. That injury involved a sprained ankle.

The most recent one was a few years ago at an airport when I decided to use the stairs to the rental car garage. This time I was carrying a bag in each hand and as I lost my balance had time to realize a fall was going to happen. I picked myself up off the landing and started limping up the steps when I heard someone in an official-looking uniform yell “hey are you alright?” “Yes, I am ok”, I answered. I felt I was ok and, as you may have guessed, I did not want to end up filling out a bunch of incident reports.
In every one of these falls, I should have followed the principles I go over when presenting slips, trips and falls training. Let’s look at each one.

Wintertime in Western PA
The Spring semester started in January. There is nothing spring about January in western PA. There are not many days of sunshine and the temperatures can stay below freezing for days at a time. You figure this out quickly. It’s early morning, books in hand and off to class I go. A bit of freezing overnight and it happens. As I begin to descend the stairs leading into the class building, my feet go out from under me, I land on the middle of my back hitting a stair edge and my attempt at becoming an Olympic Luger ends in a few seconds.
“Pay attention for icy surfaces and use the stair railing champ”, I hear my future self scolding me.

I can’t Fly and Why Did I think I Could?
At a new client and I am not familiar with the access points to the training class. It is the late shift, so there weren’t many employees around as I searched for the stairs to the training class. The building was locked down pretty well so I thought I should carry all of my training gear in one trip. I find a stairway, but it is not very well lit. I figure I will take my time and be careful. Are you paying attention to all of my rationalizations and excuses?

I’ll never know what made me think I had reached the bottom, but as I extend my foot to take my next step, I realized that I was stepping into air. “Down goes Rich!” Sprawled out on the floor with a hurting ankle, I limped to the class and did the training.
Safety principles ignored:
• Make sure you can see where you are going.
• Don’t walk on stairs with both hands carrying items.
• Ask for help.
• Don’t accept your own excuses.

Glad No One Was Behind Me
In a hurry to get to my rental car and drive to my client’s destination, I charge up the parking garage stairway with bags in both hands and my backpack across my shoulders. What could possibly go wrong? A slight stumble creates an imbalance which leads to a slow motion backwards tumble down a few stairs to the landing. Besides a hurting knee, I am not feeling any other pain, so I pick myself up, assure the one person who heard me fall that I was okay and off I went.
Lessons learned:
• There is nothing you can do to stop a fall when both hands are holding items.
• Using the stairs for a one-minute climb, with all the extra weight of the baggage, to somehow maintain my physical health and well-being is a silly exercise plan.
• I could have knocked someone else over when I became a human avalanche.
• People who use the elevator are on to something.

The Bottom Line- Don’t Be in Such a Hurry
STFs are preventable. The steps to prevention are well known and are usually followed. All three of my incidents could have been prevented if I had slowed down just a little bit and taken the few steps necessary to stay on my feet.