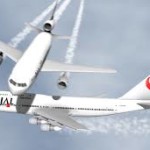 The one that almost happened.  We’ve all had them.  Maybe it was a near wreck while driving.  Maybe it was a part that broke and almost hit you.  Maybe it was the pedestrian that you almost hit while backing up the forklift.  Near misses happen often and are a call to action to take steps that can prevent the real thing from happening.

In a distracted driving video I recently viewed,  the main character, the guy who plowed into the vehicle in front of him while reading a text message, talks about how he had a number of near misses while texting.  Unfortunately, his failure to heed the near miss led to a death, jail time and lives forever changed.

I remember bumping into the car in front of me while merging from one road onto another several years ago.  I was looking back to see if it there was any traffic and accelerated without looking ahead to see if the driver ahead of me was moving forward too.  Fortunately, there was no one was hurt and there was no damage to the vehicles.  That incident was set up by a number of close calls where I was able to stop in time.  I remember saying to myself after a few of those “near misses” one day you won’t be so fortunate and you will hit someone.  I have been much more attentive in my driving since the accident.

Safety professionals encourage near miss reporting in work places.  We recognize that many near misses occur before an accident and that if we pay attention to near misses, we can prevent accidents from occurring.  Simply stated, a near miss should be reported and investigated just as you would investigate an accident.  Determining causation leads to identifying and establishing control measures to prevent the real thing from happening.

It is important for management to let employees know that near miss reporting is expected and valued.  More important is that employees need to know that they can report near misses without fear of disciplinary action.  This is one program that needs to be kept positive with a clear sense of purpose.  The goal is to prevent an accident that involves property damage or injury.  A near miss is neither of those things, it is something that could have led to those things happening.  If fear of discipline is an issue, employees will not report near misses.

One of the things I look for when evaluating safety programs is the presence of a near miss reporting system.  When near misses are being reported, it is a strong indicator of a solid safety culture where the fundamentals are in place.  It is often the last big hurdle to achieve in the process of putting that culture together.  It is a sign of mutual trust and respect between management and workers.

Near misses are the caution sign on the way to an accident.  By taking near misses as seriously as accidents, we can prevent accidents.